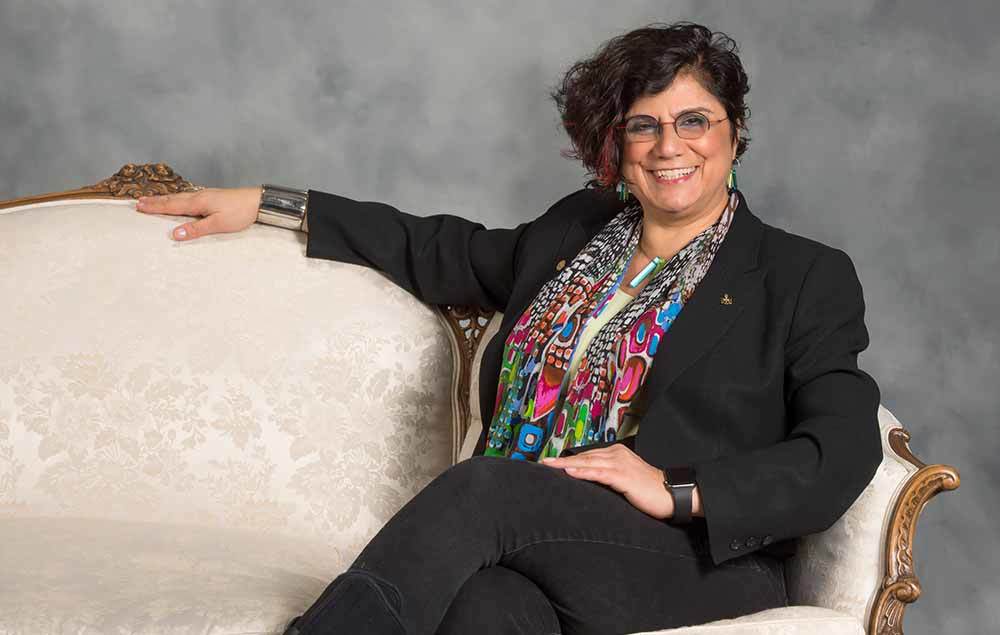 Ani Aprahamian remembers her grandmother, a survivor of the Armenian genocide and a devout Christian, walking her to school each day in Lebanon. Her grandmother would point at the moon and tell her, “Those Americans, they will bring the end of the Earth because they’re interfering with God’s work.”

When Aprahamian learned that her family would move to Massachusetts when she was 11, she knew she would miss her close-knit extended family, including 35 first cousins who played together on Sundays.

“But I was secretly very excited that we were going to the U.S. because they had gone to the moon,” she says. “I’ve been drawn to science in general since I was a very young kid. I grew up in the Middle East in the midst of a lot of turmoil and excitement. Somehow as a little kid, I thought science was going to save us, if only everyone would get on board and think logically.”

She still believes that — if only more people knew science.

For nearly three decades, Aprahamian has worked to spread her love of science at Notre Dame. The Frank M. Freimann Professor of Physics, she runs a lab that uses two massive particle accelerators at the University to gain an understanding of the elements of the universe, particularly the nuclear reactions at the heart of stars, supernovae and other cosmic events. Her team of 20 physicists attempts to duplicate the nuclear processes that determine how stars evolve and create thermonuclear explosions observed as novae and X-ray bursts. These same cosmic events expelled the matter into space that eventually turned into everything in our solar system.

“I used to give talks and say follow the light,” she says. “The only light you can see from stars is the result of nuclear reactions. But there is a lot of matter that we don’t see light from: dark matter and dark energy. At our lab here, we specialize in this overlap between nuclear physics and astrophysics.”

Aprahamian points to a chart of elements on her desk that is not the standard chart taught in high school. It’s organized by nuclei and stability and looks more like Long Island jutting into the Atlantic Ocean.

“We pretty much understand that the elements up to about iron or so are made in stars,” she says. “The Big Bang only made hydrogen, helium and lithium, which are way down here. In stars, you sort of cook everything together to get up to here (halfway). But the chart goes way over there, and we know these other elements exist, but we don’t know what kind of scenario they are made in.”

Aprahamian, with her easy laugh and a shock of red dye in her graying black hair, can also cut against the rigid stereotypes of a nuclear physicist. She says her international background helps her notice changing circumstances and understand her far-flung colleagues. She even wanted to be an ambassador as a child because the American ambassador in Lebanon was so impressive.

A high school guidance counselor in Worcester, Mass., helped Aprahamian understand that she would need family connections for such posts. Her parents were a tailor and a seamstress, so her physics teacher who saw her talent in science pointed her in that direction. She was the first in her family to attend high school or beyond.

After earning her doctoral degree and completing a stint at a national laboratory, Aprahamian came to Notre Dame in 1989. The nuclear structure lab, the University’s longest continuously funded research effort, drew her and the commitment of her colleagues made her stay.

She was the only woman in nuclear physics at Notre Dame for 27 years until she helped hire two more last year. She also secured grants for female physicists from the former Soviet Union and collaborates with them and other top female scientists from other countries.

Being a woman in a male-dominated field, she said, can be a precarious advantage. “You get noticed faster, you get a lot more attention for your work,” she says. “It has its adverse side effects too. If you do something wrong, that also gets noticed faster.”

During her career, she has been instrumental in gaining support for major research efforts, such as a $10 million National Science Foundation grant for JINA, the Joint Institute for Nuclear Astrophysics, and the Nuclear Science Laboratory at Notre Dame last funded at more than $6.2 million. She has also served as a chair of the scientific council at GANIL in France and as a reviewer for the Institute of Physics in the United Kingdom.

Aprahamian served from 2006-2008 at the National Science Foundation in Washington, learning “how science is funded, how you make priorities, how government works.” When she returned, she decided to teach classes about energy policy to non-science majors.

“I thought to expose an audience that is not normally exposed to it and get them excited about it,” she says. “Because, fundamentally and naively, I still think science is going to save us.”