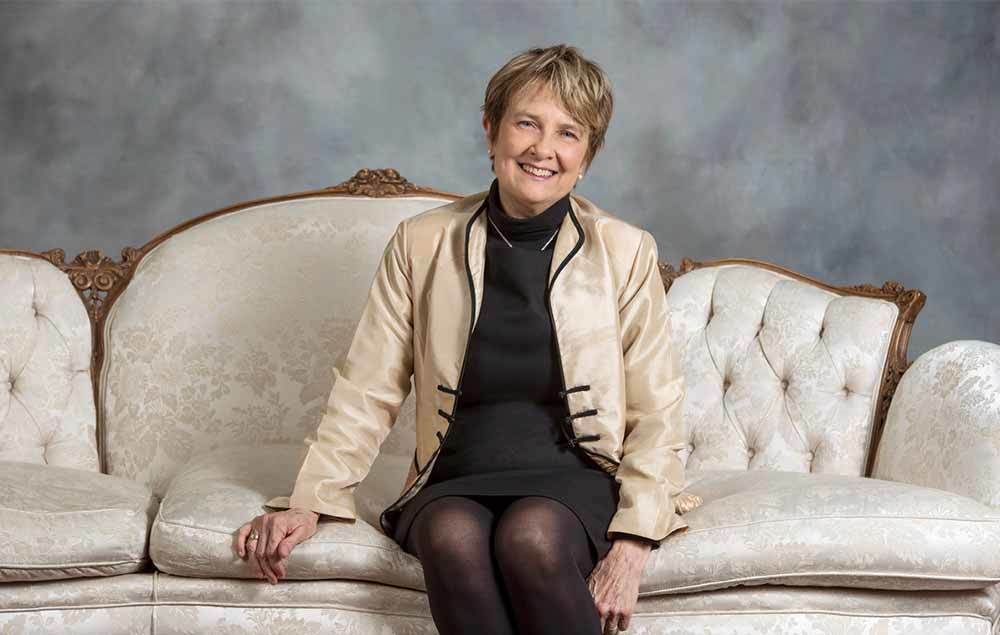 College of Arts and Letters

Keough-Hesburgh Professor of Music History and Liturgy, director of the Sacred Music at Notre Dame Program, professor of musicology and ethnomusicology

Margot Fassler was nearing the end of an especially tiring week and wasn’t sure what she would say in a speech to a group of Notre Dame benefactors she was scheduled to meet in a few hours. So she went to church to pray.

As she sat in the pew, the voices of a children’s choir drifted down from the loft in the Basilica of the Sacred Heart. She was overwhelmed, and more so when the children came downstairs and a visitor complimented their beautiful singing. One of the children responded, “Well, it’s Mozart,” and another said, “Yes, Mozart’s ‘Ave Verum Corpus.’”

“The music healed me, and I had my speech too,” Fassler says.

The power of sacred music to restore the soul may help explain how Fassler has the energy to be involved in so many and such a variety of research projects across the world. She is the Keough-Hesburgh Professor of Music History and Liturgy and director of the Sacred Music at Notre Dame Program, with joint appointments in the departments of music and theology, as well as fellowships in the Medieval and Nanovic Institutes. Her passion for the work is evident.

She grew up in upstate New York before attending Cornell University, where she studied under top mentors specializing in Gregorian chant and St. Augustine. She remembers always loving music and the church.

“I was trained to the bit by my grandmother, an ardent Catholic, a Swiss, a take-no-prisoners, holy-water-at-the-door, rosaries-on-every-doorknob kind of woman,” she said. “There’s nothing as great in quality, in quantity and in its power to heal and bring people together as our great tradition of sacred music.”

Current projects include a two-volume book about Dominican nuns in the Rhineland in the 14th century, co-written with a Harvard art historian, a historian of women religious from Germany, and a manuscript historian from Switzerland. Another is a collaborative edited book of essays by English and American scholars about the role of music in the shaping of historical understanding in the Latin Middle Ages.

Another project focuses on Saint Hildegard. Fassler has won several grants to study this 12th-century German composer, theologian, artist and scientist, as well as build a digital model of her theological conception of the creation of the cosmos, set to Hildegard's own music. Few saints and few women of the era left behind so much evidence of their inner life in music, art, letters and books. Fassler hopes to help popularize this complex thinker as more than just “a Dancing Bear of the Middle Ages.”

“There’s incredible interest in Hildegard right now,” Fassler says. “It’s good to see a woman who’s a bold thinker. She’s not always a good girl. She’s willing to stand up and be critical.”

Recently completed books include a textbook on medieval music and a history of the Cathedral of Notre Dame in Chartres, France, that won two major book awards.

Fassler also makes documentary films focusing on communities of song and ritual. She and colleague Christian Jara recently completed a film about Coptic chant in New Jersey. It tells the story of two Egyptian Christian cantors whose families settled there in the 1960s and how music has helped the community hold together and keep its identity. Previous films explore a similar theme through the story of Benedictine nuns who sing Gregorian chants and African-American gospel music at a Baptist church.

“I would say practically every major thing I’m involved with is international and interdisciplinary,” Fassler says after reflecting on the list.

And that’s just her scholarly pursuits. Her central vocation since she came from Yale in 2010 has been building the Notre Dame Program in Sacred Music to world-class status. That means everything from attracting more students into the program’s vocal, organ and choral conducting studios to hiring a conductor to build a 160-strong children’s choir from scratch. Her underlying goal is to provide churches across the country with musicians who will inspire their congregations.

Fassler says women are well represented in the music field, both in choirs and as scholars. “One of the greatest things our program promotes are women who go into parishes and the academy and lead,” she says.

Her vision will get a boost in 2017 when the Department of Music and Sacred Music Program move into a new building under construction on the south side of Notre Dame Stadium. The six-story structure will include recital and rehearsal halls, a large music library and rooms for classes, tutoring and practice, plus offices and storage for both academic units.

“Notre Dame is the great Catholic university in the United States, with a powerful intellectual and research mission that is well-funded,” Fassler says. “And if you care about religion and the sacred and the life of the Church, why would you not have a great sacred music program?”